You are here: start » heroes
heroes

All accounts come with the Hero Noctis Lucis Caelum, but you can purchase other Heroes via packs. Heroes provide boosts for your Empire and Troops. You can have only 1 Hero active at a time. Some boosts are active as long as your Hero is active while other boosts require your Hero to be sent out with your troops to be applied.

You can level up your Hero by earning Experience Points (EXP), which provides you with Power and Ascension Points (AP) that you can spend to enable or increase boosts. Each Hero has their own separate type of EXP and level at different rates.

Heroes also can equip Gear which provide further boosts. Some gear requires a minimum Hero level to be equipped.

Finally, Heroes are used to attack Monsters. Each Hero has a MP gauge that empties when you attack and refills automatically over time, but only for the currently active Hero. 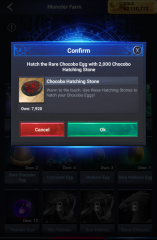